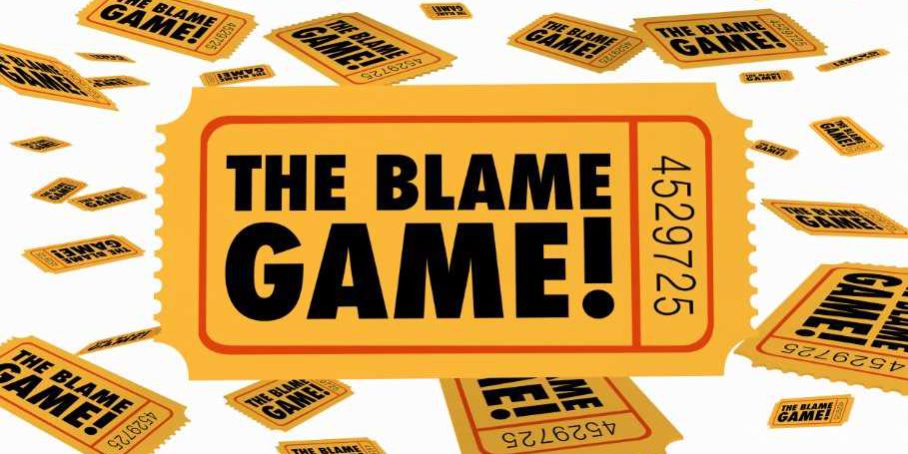 “Your life is the fruit of your own doing. You have no one to blame but yourself.” ~  Joseph Campbell

Is it me, or have you noticed the astronomical rise in situations where folks are blaming anyone and anything for their problems?

Have you noticed that practically every other news media story, social media post or press conference, seems to be one side blaming the other side for something?

This blaming pandemic is not just unfolding at a macro level where it is infecting large groups, political parties, and institutions, it is happening at a micro level, gnawing at the very make-up of the individuals who make up our country.

Take it From the Top Joe

Over the course of the last year, we have seen leaders, at the very top, casting blame outwardly at an ever-increasing rate. Whether it was blaming the pandemic for our nations low Math and Reading scores, Putin for high gas prices, or previous administrations for the state of the economy.

Just recently, I watched a video of a well-known senator standing in front of a gas sign when the price of gas was just $3.89 per gallon. He was ranting and raving at the previous president for exceedingly high gas prices, saying he was best friends with his rich Saudi friends. Funny, gas is now over $5.00 per gallon and I haven’t seen hide nor hair of this life-long politician. He is probably hiding in his $15 million house or driving his recently purchased $680,000 Ferrari-Roma. All this on a $170,000 annual salary. Do you see the irony?

From Both Sides Now

And for the record, this is not a one-sided issue. Republicans are blaming the Democrats for the violence at the capital on January 6th of 2020, the infant baby formula shortage, and world-wide inflation. They point at the immigration crisis at the border even though they never addressed the issue when they had a majority in the house and the senate!

The previous president, blamed everyone but himself for his loss in the last presidential race. While he was in office, the negative things that took place weren’t blamed on Putin and Russia, they were blamed on Chi-Na!

And just so you know, the outcry of “false and fraudulent votes!” was the battle cry of the unpopular Whig party 184 years ago when this political party needed to cast blame for their candidates losses. Sound familiar?

Blaming everyone else for your problems is nothing new, this started a very long time ago in the Garden of Eden, when Eve blamed the snake, and Adam blamed Eve for the incident in the garden. Apparently, it became a family tradition because their son Cain, whacked his brother Abel and then tried to deny any wrongdoing.

It Falls to the Bottom

This blame pandemic is happening at a micro level with individuals as well.  No longer is anyone responsible for their actions, their life, their quality of life, or their decisions. It is always and in all-ways the fault of someone or something else.

We older folks point fingers at the younger generation and blame them for being “entitled.” Yet, are we not the generation who raised these kids?

Recently, a person was fired from their job, because they didn’t show up to work. Instead of taking responsibility, they sent out a social media post bashing the greedy company who fired them (for who they are) claiming they focus only on profits while demeaning the working-class. Didn’t mention a darn thing about taking ownership for their decision to not show up.

Whatever happened to calling in sick or using PTO when you need a day off. Instead they had to make a political statement, play the victim card, and scream, “discrimination!”

The truth is that you are 100% responsible for everything that happens in your life. Just because you may be unhappy with yourself, that doesn’t give you the right to vomit your self-dissatisfaction all over the rest of the world.

There is new research that shows that blaming others is directly correlated to low-self-esteem and low self-worth. Basically, you not being happy with you!

Attempting to feel good about yourself by blaming others for your woes, never works, you have to keep casting your blame net onto bigger and bigger fish.

For thousands of years we have said:

Basically, they all point to the truth that you create your life and YOU are 100% responsible for what you create. It isn’t Biden’s fault, Putin’s fault, or Trump’s fault. It isn’t your parent’s fault, your brother’s fault or Mrs. Schunk, your kindergarten teachers’ fault that you are unhappy with yourself.

Like many things, this simple truth is a fact.

Gandhi said, “Be the change you wish to see in the world.” I believe he is saying don’t blame everyone else for your issues and then attempt to get them to change. You must change!

Maybe you don’t know how to change. Maybe you are stuck. Maybe you need a little help in understanding some of the obstacles that might be getting in your way of changing.

The good news is that the only obstacle getting in your way is YOU. The even better news is that you have 100% control over you, if you choose.

A Guidebook for Changing You

My latest book is all about change. It is entitled, Extraordinary Results for Life and is now available on audio here.

If you want to change and are ready to take 100% ownership for yourself and your life, this book was written just for you!

Here is a link to learn a little bit more about how you learn to change. Extraordinary Results for Life: Discover Your Path to be UN-ordinary!

It might just be the perfect for you at this exact moment in time!